A Season of Welcome – Janet Edwards 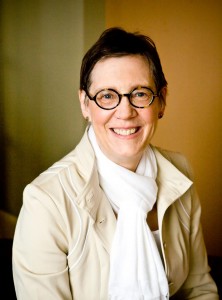 The Rev. Janet Edwards is a member at large in the Pittsburgh Presbytery. She serves on the board of More Light Presbyterians and blogs at www.revjanetedwards.com.

For Janet, there has never been an issue of whether or not LGBTQ people should be fully accepted as a part of the Church community. Her uncle is gay, and she remembers watching him with his partner display all the qualities of marriage in their relationship: mutual love and commitment. And so, with her nature as a progressive, it was only natural that Janet thought of herself as a straight ally for years. Later, when Janet came to understand herself as bisexual, her way of seeing the Church didn’t change. Neither did the way others saw her. Some people had questions, but on the whole, most understood that this didn’t change anything. Janet was the same as before: a person committed to love and equality for everyone in the Church.

A Season of Welcome is a website dedicated to celebrating the gifts of ordained LGBTQ Presbyterians.  If you are a ruling elder, deacon, or teaching elder who is LGBTQ, please consider submitting your own story.