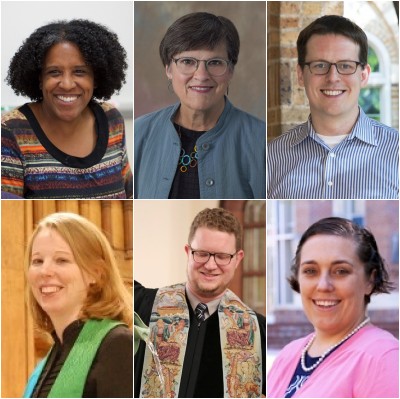 The Covenant Network of Presbyterians is pleased to announce a new class of Directors joining its board in 2019. This group of leaders and influencers from across the PCUSA, together with ten continuing members of the Board, will guide our ministry of advocacy and equipping in congregations and councils around the country.

“I couldn’t be more excited than to serve alongside these faithful, prophetic servants of the church,” said the Rev. Marci Auld Glass, who was elected to serve another term as Moderator of the Board. “Their history of advocacy, their strengths as preachers and teachers and their passion for transformation will have a real and immediate impact on our organization and on the church.”

The Board will hold its first meeting of the year in January.

The Rev. Dr. Margaret Aymer is the First Presbyterian Church, Shreveport, D. Thomason Professor of New Testament at Austin Presbyterian Theological Seminary. She is the author or editor of four books, Confessing the Beatitudes Horizon Bible Study for Presbyterian Women, and other on-line and print short commentary articles. She also edits Horizons in Biblical Theology. This year, Dr. Aymer celebrates her fifteenth year of ordained ministry and her fourteenth year of marriage to Dr. Laurent M. R. G. Oget, with whom she parents Gabriel Oget, an active and curious pre-schooler.

The Rev. Lucy Forster-Smith began has served since 2018 as Senior Associate Pastor for Leadership Development and Adult Education at Fourth Presbyterian Church in Chicago. Previously, she was Sedgwick Chaplain to the University and former Senior Minister in the Memorial Church on the Harvard University campus. Lucy grew up in Council Bluffs, Iowa, in the American Baptist tradition. She graduated from the University of Sioux Falls in South Dakota, and received a Master of Divinity and a Doctor of Ministry from Princeton Theological Seminary. Prior to her post at Harvard, Dr. Forster-Smith was Campus Minister at the University of Washington and chaplain at Carroll University (Wisconsin) and Macalester College (Minnesota). Lucy met her husband, Tom Forster-Smith, at Princeton Theological Seminary. Tom is also ordained as a Teaching Elder in the PC(USA). They have two daughters, one an art teacher and the other an ordained PC(USA) minister; a son finishing his Ph.D.; a daughter-in-law who teaches fifth grade; and one granddaughter.

The Rev. Matt Gaventa is Senior Pastor at University Presbyterian Church in Austin, Texas, and previously served as pastor to Amherst Presbyterian Church in Amherst, Virginia, and as chaplain to Sweet Briar College. Matt is an acclaimed writer and preacher whose work has been featured in Working Preacher, on the Day1 Sermon Broadcast, and in The Christian Century, for whom he co-hosts the podcast Technicolor Jesus. Matt holds degrees from Georgetown University, the University of Iowa, and Princeton Theological Seminary, and is the 2012 recipient of the David H.C. Read Preacher/Scholar Award from Madison Avenue Presbyterian Church. He currently lives in Austin with his wife Sarah and their son Charlie.

The Rev. Jenny McDevitt has served as Senior Pastor and Head of Staff at Madison Avenue Presbyterian Church since April, 2018. Prior to MAPC, Jenny served at Village Presbyterian Church outside of Kansas City as Pastor of Pastoral Care for six years. She was ordained at First Presbyterian Church of Ann Arbor, Michigan, where she began in ministry back in 2009. She joined First Presbyterian Church in Mount Vernon, Ohio, not far from Kenyon College, where Jenny earned a degree in creative writing. That degree is put to good use as she writes liturgy for national conferences and large gatherings on a regular basis (in addition to every Sunday in NYC). Jenny earned her MDiv from Union Presbyterian Seminary in Richmond, Virginia, where she is now a member of the Board. Jenny reads voraciously, runs slowly, hopes relentlessly, and drinks too much coffee. She has two dogs, one of whom accompanies her to church several times a week. Annie the Puppy excels at pastoral care and stealing staff lunches.

The Rev. Keith Phillips is Associate Pastor for Mission, Youth, Adult Education, and Community Building at First Presbyterian Church of Salina, Kansas. A native of Newport News, Virginia, Keith is in his first call after graduating from Columbia Theological Seminary in December 2017. During a seminary journey filled with the support and guidance of friends, family, counselors, mentors, and colleagues that Keith discovered greater inward wholeness and outward authenticity in his life as a beloved child of God. This included his coming out as gay to those closest to him in early 2015. Since then, he has sought and followed God’s direction in integrating his own journey into his understanding of his call. This has led to a greater emphasis on pastoral care in helping everyone claim the love and grace of Jesus Christ on their own journeys.

The Rev. Lucy Strong is Associate Director of Admissions and Financial Aid at Columbia Theological Seminary in Decatur, Georgia. Previously, Lucy served as the Presbyterian Campus Minister at UKirk Agnes Scott and the Greater Decatur Area for the Presbytery of Greater Atlanta. Lucy is a graduate of CTS, where she was president of the student body and recipient of the Robert Ramey Jr. Church Leadership Award. Lucy and her wife, Sarah, live in Decatur, GA.

Together with these new directors, these esteemed church leaders are continuing their service on the board: