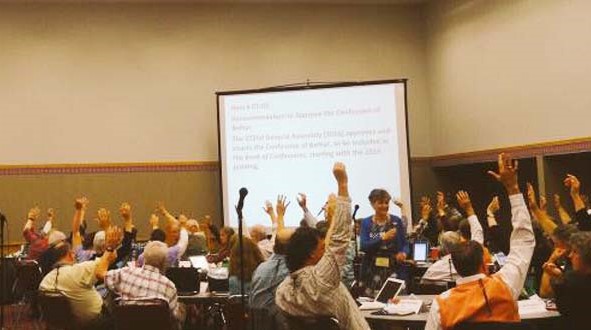 As we approach the 223rd General Assembly (2018) in St. Louis, the Covenant Network of Presbyterians is sharing some of our hopes for the business before this Assembly. We hope that commissioners, delegates and friends across the church will carefully consider the ways their discussion and votes can make for a more generous and just Presbyterian Church (U.S.A.)

The General Assembly is the most inclusive council of the Presbyterian Church (U.S.A.), setting a tone and speaking powerful words to—and on behalf of—the whole denomination. Usually, nobody gets too excited about its Standing Rules, the procedures that govern everything from how committees are assigned to how the moderator is elected. But those rules do really matter: Process can have a big impact on results.

Every year, the Assembly Committee on General Assembly Procedures (#3) considers slight changes to help the rules evolve and improve. This year, the Covenant Network of Presbyterians has real concerns about the potential impact – and perhaps unintended consequences – of two of those proposed changes. We hope the committee and the full Assembly will think very carefully before enshrining them in the G.A. rules.

We oppose Item 03-19, which would revoke the opportunity for advocates to represent most presbyteries when they send overtures to the General Assembly. The change would allow only the first two presbyteries who send a particular overture to have an official “overture advocate.” Any other concurrences would essentially be disregarded in assembly process. We think this is deeply unfair to presbyteries (and synods) who have invested in thoughtful conversation and whose voices deserve to be heard. Under the proposal, which presbyteries could speak would be determined mainly by the happenstance of presbytery meeting schedules (or how quickly a particular clerk reports the action to Louisville). We strongly believe that all presbyteries — having heard from Sessions or presbytery committees, deliberated and voted — should at the very least be given five or so minutes to be heard by Assembly commissioners. It’s a small but important way that grassroots are heard at the Assembly, and it should not be eliminated.

We also oppose Item 03-12, which would allow self-declared “experts” to address assembly committees in response to official Assembly resource people. Resource people are those elected by the Assembly to particular tasks or who carry out the Assembly’s work as part of the staff. They get to speak because their positions or experience make their insights crucial to the Assembly’s work. They generally provide information, rather than advocacy. The proposed rule change would allow those with opposing views—even if those views are not rooted in accurate facts or recognized by official Assembly bodies—to have equal standing in committee debates. Those voices can still be heard, but in open hearings just like the rest of us. But we think this change would be unnecessary, and could greatly complicate committee meetings with its vagueness and potential for misuse.

While well intentioned, both of these standing rule changes would actually weaken our committee conversations. We hope the Assembly will not make these two changes, ensuring an open — and fact-based — deliberative process.

If you have questions or ideas, let us know. To learn more about Covenant Network activities at this General Assembly, see this link. and for a preview of business in other committees, click here. Finally, we would be grateful if you would consider helping us make our G.A. witness possible with a donation. Thank you!