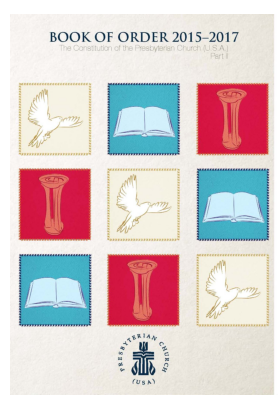 The Presbyterian Church (U.S.A.) has been wrestling with issues surrounding the blessing of same-gender relationships for at least the last 25 years. With the rapidly-changing landscape for marriage equality in the United States, the rules on applying constitutional language written for a different context were created via authoritative interpretations – both by the General Assembly and by the GA Permanent Judicial Commission.  Assemblies in 1994 and 2000 proposed Book of Order amendments that would have prohibited the blessing of all same-gender unions, but both failed in the presbyteries.

The first presbytery overture to the General Assembly to amend the Book of Order to recognize same-gender marriage came in 2008, and that Assembly mandated a special committee to explore a variety of aspects of equal rights, civil unions, and Christian marriage.  The special committee reported to the 2010 Assembly, which also received enough overtures on the topic to require a GA committee devoted to this subject alone. That trend continued in 2012, with overtures both to strengthen the prohibitions established by authoritative interpretation, and to abolish those restrictions. Overtures seeking PCUSA permission to conduct same-gender marriages took two forms – an authoritative interpretation (AI) to undo the prohibition created by the GAPJC, and an amendment to change the language in the Directory for Worship.

In preparation for the 2014 GA, leaders from More Light Presbyterians and the Covenant Network of Presbyterians gathered to discuss helpful approaches to the pastoral crisis facing the church as more and more same-gender couples were seeking the participation of their ministers in solemnizing their marriages.  The boards of both organizations affirmed the need for both an AI and a Book of Order amendment, and sought to develop and collect suggested language.  During this process, they became aware of an overture drafted by a group in Albany Presbytery.

Asked about the research that went into their draft, Presbyterian Rainbow co-coordinator Terry Diggory explains:

I participate in an LGBT advocacy group in Albany Presbytery called Presbyterian Rainbow.  I suppose you could say that much background “research” took place in conversations in this group over the course of many years.  I also participated in a four-person group commissioned by Albany Presbytery to devise a process for studying marriage and civil unions, in response to a call from the 2010 GA.  Members of this group were intentionally selected to represent a range of theological perspectives, and learning to listen to each other was another vital component of research.  I know it helped me listen for the likely response of my conservative sisters and brothers as I was working with the drafting team to write the overture.

Presbyterian Rainbow charged a three-person drafting team with that task: myself, Ruling Elder Judy Moyer, and Teaching Elder Lois Wolff.  In the background, once again, was our reading about marriage: in particular, John Witte, Jr., From Sacrament to Contract: Marriage, Religion, and Law in the Western Tradition (Louisville, KY: Westminster John Knox, 1997); William Stacy Johnson, A Time to Embrace: Same-Gender Relationships in Religion, Law, and Politics (Grand Rapids, MI: Eerdmans, 2006); and, of course, the Bible.  My own research in the Bible is summarized in an essay posted on the Covenant Network website.

In May 2013, while the drafting process was just getting under way, I attended a Covenant Network regional conference in New York City, “What Now?  Marriage Equality for Presbyterians and Everyone Else.”  That was very valuable for getting up to speed on both legal and theological issues, as well as strategy considerations.  Throughout the drafting process, we kept in touch with Covenant Network (through Tricia Dykers Koenig) and MLP (initially through Patrick Evans, while he served as Interim Executive Director) and their advice was of great benefit.

For crafting the actual language of the overture, we had some previous overtures to compare: Albany had submitted an AI overture in 2012, and both AI and amendment overtures in 2010.  The discussion around the adoption of the New Form of Government (nFOG) in 2010-2011 helped to sharpen our perception of the purpose of any language in the Book of Order.  The 2013 study of “Christian Marriage in the Presbyterian Church (U.S.A.),” issued by the GA Office of Theology and Worship, offered helpful language about the purpose of marriage.  One sentence in the amendment is adapted directly from that study: “In the Reformed tradition, marriage is also a covenant in which God has an active part, and which the community of faith publicly witnesses and acknowledges.”  But of course the primary text we had to work with was the language of the Directory for Worship (W-4.9000) itself.  Even though the amendment is presented as a replacement for that language, much of the original text is retained in the amendment.  There’s just less of it, and of course the language of gender exclusion is removed.

That’s pretty much it for “research.”  Once we had a full text, we shared it with Covenant Network and MLP.  Meanwhile, the text was vetted in a general meeting of Presbyterian Rainbow, and then distributed to every session in Albany Presbytery.  The purpose of this broad distribution was twofold: 1) to ensure that no one would be blindsided by the appearance of the overture when it reached presbytery, and 2) to encourage as many sessions as possible to endorse the overture.

Those within CovNet and MLP working on possible overtures were impressed by the Presbyterian Rainbow draft; after minor tweaking, they recommended that language to those working in other presbyteries.  The first to vote was the Presbytery of the Cascades, approving an overture proposed by the Session of Southminster Church, Beaverton, OR.  Eventually 17 presbyteries endorsed the same overture – including the Presbytery of Albany.

We repeated this process after Covenant Network circulated recommended text for an AI.  In the end, a total of 10 sessions endorsed one or both overtures, and both easily passed presbytery by voice vote.  This process took a long time, and we are grateful that the Presbytery of the Cascades acted more quickly than we were able to, and that other presbyteries followed suit.  Sometimes our process in Albany seems slow even by Presbyterian standards!

Dr. Diggory led the group of overture advocates from the 17 presbyteries in making the case for the amendment to the Committee on Civil Union and Marriage Issues at the 221st General Assembly in Detroit.

The Committee made two amendments to the language proposed in the overture: changing “shall” to “may” in one sentence, clarifying the initial intent; and adding a final sentence, restating the commitment to freedom of conscience for all, including those whose conscience leads them not to participate in conducting same-gender marriages. That addition is similar to language from the authoritative interpretation overture:

From the AI overture: In no case shall any teaching elder’s conscience be bound to conduct any marriage service for any couple except by his or her understanding of the Word, and the leading of the Holy Spirit.

With these changes, the GA Committee recommended both the AI and the Book of Order amendment to the GA by substantial margins, and many believed that both measures were likely to prevail in the full Assembly as well.

As the docket time for the report of the Committee on Civil Union and Marriage Issues approached, a theologically-diverse group from Seattle Presbytery gathered for a meal – including a committed conservative evangelical pastor, one of the co-moderators of More Light Presbyterians, an associate executive presbyter, and the executive presbyter. Together they conceived another possible change to the amendment proposal, designed to help those not in favor of changing the section to see their concerns reflected in the new language: adding the phrase “traditionally a man and a woman” following “Marriage involves a unique commitment between two people.”  First, the idea was presented to leaders of the Fellowship Community, who affirmed it.  When consulted, both MLP and CovNet leaders found the proposal consistent with the intention for the amendment to provide a place where all Presbyterians could stand together.  When the Assembly in plenary considered the proposed constitutional amendment, the addition of the phrase was moved by a commissioner who had served for years on the Board of the Covenant Network, seconded by a former co-moderator of More Light Presbyterians, and approved enthusiastically by the whole GA.  Then the proposed amendment was approved to be sent to the presbyteries by a 71% majority. [The official record is on PC-Biz.]

The 171 presbyteries supported the amendment at a similar percentage – 121 in favor, 47 opposed, with one tie, one choosing to take no action, and one not reporting.

Marriage is a gift God has given to all humankind for the well-being of the entire human family. Marriage involves a unique commitment between two people, traditionally a man and a woman, to love and support each other for the rest of their lives. The sacrificial love that unites the couple sustains them as faithful and responsible members of the church and the wider community.

In civil law, marriage is a contract that recognizes the rights and obligations of the married couple in society. In the Reformed tradition, marriage is also a covenant in which God has an active part, and which the community of faith publicly witnesses and acknowledges.

If they meet the requirements of the civil jurisdiction in which they intend to marry, a couple may request that a service of Christian marriage be conducted by a teaching elder in the Presbyterian Church (U.S.A.), who is authorized, though not required, to act as an agent of the civil jurisdiction in recording the marriage contract. A couple requesting a service of Christian marriage shall receive instruction from the teaching elder, who may agree to the couple’s request only if, in the judgment of the teaching elder, the couple demonstrate sufficient understanding of the nature of the marriage covenant and commitment to living their lives together according to its values. In making this decision, the teaching elder may seek the counsel of the session, which has authority to permit or deny the use of church property for a marriage service.

The marriage service shall be conducted in a manner appropriate to this covenant and to the forms of Reformed worship, under the direction of the teaching elder and the supervision of the session (W-1.4004–.4006). In a service of marriage, the couple marry each other by exchanging mutual promises. The teaching elder witnesses the couple’s promises and pronounces God’s blessing upon their union. The community of faith pledges to support the couple in upholding their promises; prayers may be offered for the couple, for the communities that support them, and for all who seek to live in faithfulness.

A service of worship recognizing a civil marriage and confirming it in the community of faith may be appropriate when requested by the couple. The service will be similar to the marriage service except that the statements made shall reflect the fact that the couple is already married to one another according to the laws of the civil jurisdiction.