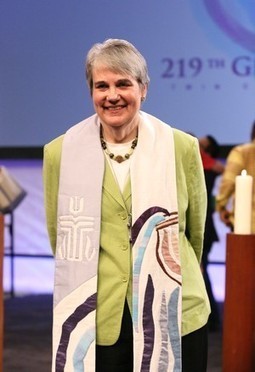 The church rightly remembers today with joy and gratitude the ministry of our sister and friend Cindy Bolbach.

As Moderator of the 219th General Assembly (2010), Cindy modeled the grace and dignity of the office, carrying out every formal appearance and informal conversation with her characteristic creativity and wit. All her service was rooted in a deep and abiding faith, but tempered always with that sense of humor—wickedly funny but never mean or cruel. Her affection for the church—its tradition and polity, its mission and people—was evident to the end.

It is impossible for the Covenant Network to reflect on Cindy’s life and service without reflecting on that signature accomplishment of the 219th General Assembly—the passage of Amendment 10-A. Back when she was a candidate standing for election, Cindy had told the commissioners gathered at the Covenant Network’s pre-Assembly dinner that she had been in the Covenant Network “before there was a Covenant Network.” She was talking about the “Stonecatchers” (as opposed to stone throwers), a group in National Capital Presbytery she helped form, one of the first groups to declare (the then new) G-6.0106b unsustainable for the life, mission and future of the Presbyterian Church (U.S.A.).

How fitting it was that Cindy herself was present at the Presbytery of Twin Cities Area the day it became the 87th presbytery to approve the new ordination standards. But even as an outcome she had long worked for came to be, Madam Moderator was gracious and turned immediately to working for reconciliation—hoping that relationships might be sustained and deepened, never denying or diminishing the real theological differences, but seeking the oneness that is God’s doing, not of human making.

The Covenant Network is grateful for the life and service of Cynthia Bolbach. May all of us, in the ministry we each bring to the church and the world, be so faithful, so gracious, and so committed to the love and justice of Jesus Christ.