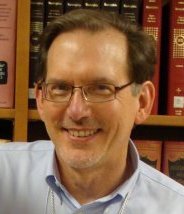 Scott’s  ordination as a teaching elder offers a sign of hope for the many people who have long worked for a more inclusive church policy toward the ordination of our gay, lesbian, bi-sexual and transgendered brothers and sisters. His gifts for ministry have been evident since his first ordination in 1982, and we are pleased that he is able to carry out his ministry as the Executive Director of the Wisconsin Council of Churches as an ordained clergy representative of the PC(USA).

The Covenant Network has worked to support Scott’s candidacy and defend John Knox Presbytery against charges raised in an ecclesiastical judicial case.  Many people in the Covenant Network leadership and staff have worked closely with Scott in his service to the denomination and they stand united in their admiration and support of him.

Interim Executive Director, Nancy Enderle, worships with Scott at Covenant Presbyterian Church in Madison, WI where the Enderle family and Scott are members.  She also served on the Committee on Preparation for Ministry that oversaw Scott’s inquiry and candidacy for ministry.  “Scott’s grace under pressure, and his kindness and humility, were not just evident during his work with the CPM, but in every aspect of his involvement in the life of our congregation and the greater community of Madison.”

As we celebrate this wonderful day in the life of the PC(USA) and for Scott personally, we pause to hold in prayer those men and women who seek ordination and still encounter barriers to their full involvement as ordained leaders.  In an article reported in the Madison Isthmus, Scott reflects on his future hopes for change in the church: “I’ve just seen so much change and transformation in people as they have encountered gay and lesbian Christians and moved to a more gracious place in their faith. But it’s one person at a time, one story at a time.”  We’re grateful for Scott’s leadership and hopeful for the relationships that will continue to move us toward a church as generous and just as God’s grace.