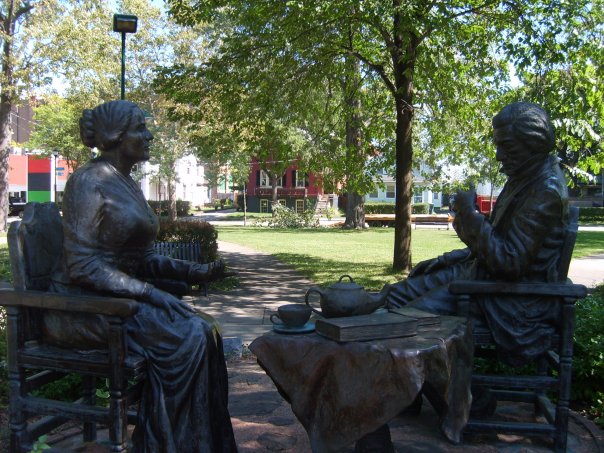 Transfiguration, Valentine’s Day, Chinese New Year, Presidents’ Day, Shrove Tuesday, Mardi Gras … Pick your celebration! TODAY we’re celebrating the launch of our new web site — on the birthday of Susan B. Anthony. Born on February 15, 1820, her famous last public words, “Failure is impossible,” still inspire those who work and wait for a better world, for a just and generous church. Earlier struggles toward equality and dignity were also slow and difficult, impeded by external opposition and internal tensions and impelled by a vision of what God makes possible.

Susan B. Anthony’s story is one of partnership. Formed by her Quaker tradition to believe in the equality of all persons, she became an ardent supporter of the abolition of slavery and the enfranchisement of women.

Susan B. Anthony’s partner in the suffrage movement was Elizabeth Cady Stanton. A Scotch Presbyterian herself, Stanton was an outspoken critic of the churches’ slow acceptance of equality. The two women were very different in background and temperament – one Quaker, unmarried, shared a household with sister; the other Presbyterian, married with seven children, with a husband working in another city. But they forged a personal bond and a political partnership that defined their stories for over forty years and our history to this day. They were always united in public, but it was a complicated relationship that strained over questions of principle and compromise, ends and means, allies and opponents, single issue focus or comprehensive agenda. Stanton argued that at the head of the list of rules for reformers was “Do all you can to get people to think on your reform, and then, if the reform is good, it will come out in due season.” Anthony argued for doing whatever it would take to get the right to vote, and the consequences of emancipation would follow. These tensions around common vision and differing strategies were real and painful, but never terminal. A friendship based on respect and common cause was a sustaining force. Their life was worthy of the calling to which they had been called, “bearing with one another in love.”

Another partnership spells the same kind of tension and forbearance:

Susan B. Anthony and Frederick Douglass, former slave and eloquent anti-slavery leader, were also lifetime friends. Douglass, whose birth we also mark in February, was a frequent guest in the Anthony home– not exactly social convention in those days! When tensions emerged between the antislavery and the woman’s suffrage movements, longtime allies were estranged. After the Civil War hopes were high for the enfranchisement of both women and former slaves, but the language of the 15th amendment was restricted to “race, color, or previous condition of servitude.” Women of any color were omitted. In May of 1869 Susan B. Anthony and Frederick Douglass squared off publicly at the annual assembly of the American Equal Rights Association , Douglass making an impassioned appeal that the then-called “negro vote” was more urgent than the woman’s vote. The inclusion of women, it was argued, would make a hard political fight harder, if not impossible. The two movements were split, and the woman’s movement itself was divided on whether to support a voting rights amendment that did not include them. The relationship between Anthony and Douglass strained but it never broke. Enough forbearance, enough love, enough respect, enough larger hope to maintain that “unity of the Spirit in the bond of peace.“

Just down the street from the Anthony home in Rochester is a small park featuring a larger than life sculpture of these two larger than life persons, sitting at a table and having an animated conversation over tea. The sculptor lives in the neighborhood, a Laotian refugee named Pepsy Kettavong, who was brought to this country thanks to church sponsors. He designed and cast a sculpture of Susan B. Anthony and Frederick Douglass talking together, sitting at a table, and having tea — because for this refugee from the political and religious repression of Laos, their enduring relationship was a model of hope.

That image evokes the concluding words of the Confession of 1967:

“Already God’s reign is present in the world, stirring hope in all people …
With an urgency born of this hope,
the church applies itself to present tasks and strives for a better world.
It does not identify limited progress with the kingdom of God on earth,
nor does it despair in the face of disappointment and defeat.
In steadfast hope,
the church looks beyond all partial achievement to the final triumph of God.”

I believe that the Covenant Network of Presbyterians models hope. We work to bring people together around the table, to keep people together at the table, to come to the Lord’s table together in the one hope of our calling. We work at relationships and partnerships that witness to the love of Christ. We work in covenant with brother and sister Presbyterians toward a church as just and generous as God’s grace. We work for what we believe, by that grace, is possible.

This website is our network and it is our table. Please, sit down, and enjoy the conversation!